You are here: Home / Articles / Gen Z and The Gig Economy - Everybody Starts Somewhere

Gen Z and The Gig Economy - Everybody Starts Somewhere 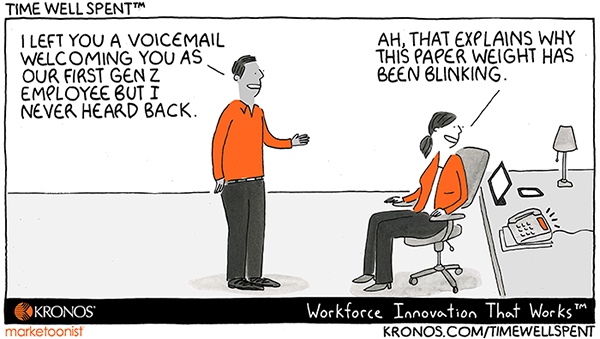 This post is submitted by Joyce Maroney, Executive Director of the Workforce Institute at Kronos. What's up with Gen Z and the gig economy? Do they prefer gig work over traditional jobs?

While terms like “gig” and “gig economy” suggest a brave new world, sometimes it's easy to forget that temporary employment has been around for a long time, especially for younger and entry level workers. The rise of platform enabled gigs like Lyft, Door Dash, etc. have made it easier to connect with and be paid quickly for those jobs, but those platform enabled jobs still represent the minority of gig work for younger workers. Research from the Federal Reserve Report on the Economic Well Being of US Households in 2018 defined gig work as a range of “informal, infrequent paid activities” that ranged from dog walking to selling goods at flea markets. They found that only 5% of 18-29 year olds engaged in work where they found their customers online, but 37% overall had participated in gig work overall.

I started working part time in 1970, at age 14, helping with payroll in my father's codfish processing plant in the summer and doing retail, housecleaning and babysitting jobs during the school year.  My objective was spending money.  As my skills and maturity evolved, I took on more challenging work during college summers, serving as a lab technician at a pediatric hospital.  I still cared about the spending money, but the skills I was acquiring became increasingly important as well.  These earliest gig jobs helped me learn how to show up for work.

My first post-collegiate job was a temporary one, helping a biochemistry professor develop and test lab instructions for his organic chemistry course.  From there, I moved on to my first full time job, abstracting toxicology reports for a team of researchers and evaluating the health of Chinese Hamster chromosomes.  The isolation of that work wasn't a good fit for me.  I moved on to my next gig - accepting a contract to teach 9th grade biology and 10th grade chemistry for one year to fill a teacher shortage.  I catered private events during grad school and finally got a “real” job in 1982. By four years post-college I'd had 4 different jobs, 3 of them temporary by design.  Like the Gen Z's pursuing their entry level jobs today, those gigs provided the funds and flexibility I needed to prepare myself for my own future of work.

So, maybe it's not so surprising that our recent research of Gen Z around the world reveals that they see a lot to like in the gig economy as they move into the workplace.  Gen Z is the biggest cohort in the world population right now - 32% vs. 31.5% Millennials according to Bloomberg. Employers who want to employ their fair share will do well to invest in understanding them.  We surveyed 3,400 Gen Z workers across Australia, Belgium, Canada, China, France, Germany, India, Mexico, the Netherlands, New Zealand, the U.K., and the U.S. to learn about their attitudes toward work.

Our data indicates an even higher rate of gig economy participation than that cited in the Federal Reserve study, with 46% percent of Gen Z respondents globally saying they've done gig work. When asked what's appealing about it, they cite flexible work schedules (55%) and greater independence (i.e. being their own boss; 53%) as the most appealing aspects of the gig economy.

When asked about their long-term career aspirations, though, Gen Z desires the benefits that more traditional work models provide. They are interested in the flexibility and independence of gig work, yet hesitant to join the gig economy due to lack of stability and unpredictable pay.  This desire for stable predictable hours and pay has resulted in gig worker strikes and political action. The recently signed Assembly Bill 5 (AB5) in California strengthens the rules that define contractor vs. employee status in the interest of ensuring that employers aren't using the former to avoid extending benefits to workers.  More of these actions will follow as lawmakers hustle to catch up with the new dynamics of high demand - and in many cases on demand - talent.  And employers will continue to make tough decisions as they blend full and part time employees as part of their mission.

What can employers do to appeal to Gen Z who want both stability and flexibility?  While our respondents say job stability is “very important” (46%), with nearly all (91%) saying it's at least moderately important, they may not stay long. Twenty-seven percent expect to move on from their first full-time job within two years. They expect control over their schedules with 33% saying they won't stick around if they don't have a say over their work schedule. Gen Z respondents in Canada (33%), the U.K., and the U.S. (both 31%) say flexibility to work when, where, and how they want is motivation to deliver their “best work.” Similarly, 1 in 4 (26%) Gen Zers worldwide would work harder and stay longer at a company that supports flexible schedules.

Employers who'd like to keep them longer will find ways to incorporate the flexibility advantages of the gig model into their workplace culture.  While we all learn that even the best jobs include aspects we don't love, some employers do better than others to create environments where employees thrive and choose to remain. Consider employees' preferences in their schedules.  If your employees' jobs don't require presence, support remote work where possible.   Consider unlimited PTO if you can.

And don't forget that the benefits of the gig economy can help you throughout the employee lifecycle.  In 2018, I resumed the gig life as I entered semi-retirement while continuing to work for my employer.  Everybody starts somewhere.  But the gig life is a great way to slow down as well.

This post was originally published on the Kronos What Works Blog.