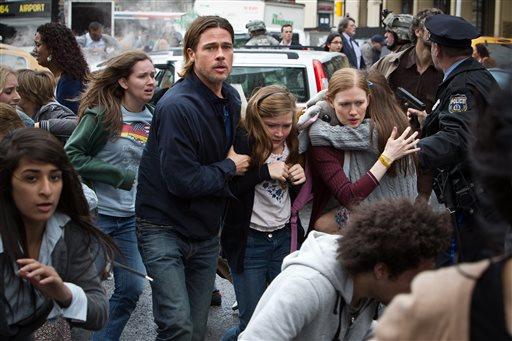 I've had a long and fun week.  At the end of last week I was in Seattle to host and keynote our  local user conference, KronosLive.  I hadn't been to Seattle since the early 90's, so this trip was a great opportunity to mix business with pleasure.  My husband came with me and we spent Saturday morning at the Pike Place Market,walked Alki beach, rode the giant Ferris Wheel and otherwise enjoyed Seattle.  Lunch with Tony,  Indian food at Sai's house, fabulous Italian dinner with Tamara.  We moved on to Chicago for SHRM - lunch with Sharlyn, Gage with Marcia, dinner with Connor & his fiance Kim.  And yes, lots of work got accomplished during and in between social events.

I'm thinking about these work friendships this week in light of the new Gallup poll that indicates 52% of workers aren't involved in, enthusiastic or committed to their work and 18% are actively disengaged.   Like a lot of previous data we've seen, this 2012 SHRM survey reveals relationships with coworkers as a leading driver of engagement.  And while there is scholarly evidence that good relationships with co-workers increase productivity,  our personal experiences on the job are probably sufficient to demonstrate that point.  Whether it's your boss or a team member, a negative relationship at work can make all the difference in your commitment to the job.

And what does this all have to do with World War Z?  Brad Pitt hurtles around the world trying to save humanity from a zombie outbreak.  His survival - and that of his family - are dependent on his ability to rely on his old work friends while quickly forming productive relationships with new ones.  He survives due to the mutual trust, respect and commitment to a larger cause he shares with these people.  And whether you like zombie movies or not, that's a lesson worth repeating.

What we're reading this week:

Great Opening Session at #SHRM13 in Chicago http://ow.ly/mfQmM via @WF_Institute

RT @SmarterCafe: Use your "smart" phone for #Kronos support! http://ow.ly/m95T5

#SHRM13 has been a blast! Thanks to everyone who stopped by the #Kronos booth. Check out some of our pictures: http://ow.ly/mbepj