You are here: Home / Podcast / Ready for the gig economy?

Ready for the gig economy? 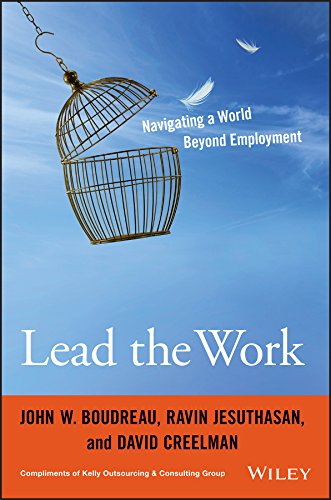 Today's post is courtesy of Joyce Maroney, executive director of the Workforce Institute.

I recently had a conversation about the gig economy with my colleague, David Creelman.  David is the CEO of Creelman Research and writes on a broad variety of human resource topics.  His recent book, Lead the Work: Navigating a World Beyond Employment , explores the future of work in a world where the traditional employer-employee relationship is only one route to productivity.

How big is the gig economy? An August Gallup report said that 36% of U.S. workers are participating in the gig economy.  A 2018 survey by Airbnb indicated that 1 in 10 US teachers supplemented their income by hosting guests in their homes.  Gallup defines the gig economy to include "multiple types of alternative work arrangements such as independent contractors, online platform workers, contract firm workers, on-call workers and temporary workers."

The Gallup report distinguishes between truly independent gig workers who have autonomy and control over their schedules such as contractors and those who offer their services via platforms like Uber and Airbnb vs. contingent workers who don't have this autonomy and control.  They surveyed workers in both categories, as well as salaried employees about their attitudes toward their work.  (See chart above.)

Not surprisingly, their data shows that the attitudes of the low control contingent workers are much closer to their salaried counterparts on most issues except security, stability, and timely and accurate pay.  The truly independent contractors score significantly higher than salaried or contingent workers on many fronts including flexibility, passion about their work, control over the work, etc.  Timely and accurate pay is still more challenging for them than is the case for salaried workers, but they otherwise appear pretty satisfied with their independent gigs.

So, is the future of work going to look a lot more like the gig economy?  Is the traditional employer-worker relationship truly changing?  How can organizations provide a more gig-like experience to the top talent they want to attract and retain? David and I take on these and other questions in the podcast below.  Please listen in, and let us know what you think in the comments section.

Conversation with David Creelman about the gig economy?