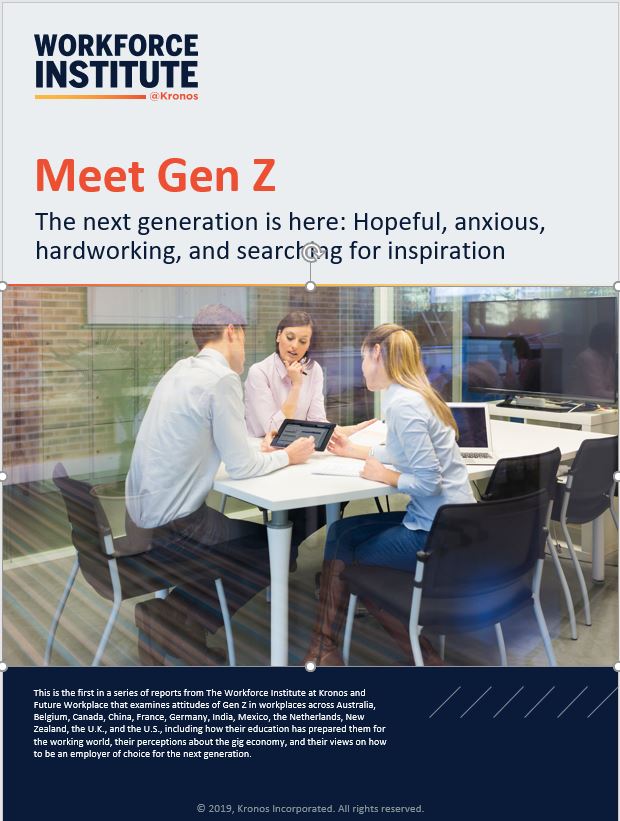 This post is submitted by Joyce Maroney, Executive Director of the Workforce Institute at Kronos. In it, she discusses the first installment of a 3-part series of reports on our most recent research - a global survey of 3,400 members of Generation Z finds them optimistic and anxious about work.

We asked Gen Z folks in Australia, Belgium, Canada, China, France, Germany, India, Mexico, the Netherlands, New Zealand, the U.K., and the U.S. how their education has prepared them for the working world, their perceptions about the gig economy, and their views on what employers need to offer them in order to attract and retain them. For purposes of this research, we are defining Gen Z as people who are currently 16-25 years old.

For me, the most surprising finding was the high level of anxiety expressed by our respondents when it comes to what they believe are their biggest barriers to professional achievement. In fact, "my anxiety" is the top answer they gave when asked to rank a list of potential barriers including education, family finances, location, etc. Across all regions, 34% percent of our respondents felt anxiety was their top barrier, with women (39%) feeling greater anxiety than men (29%). When we look at responses by country, anxiety jumps to 44% in Canada and 40% for the US and the UK.

I wondered if this anxiety was specific to our respondents. It's not. A 2018 report from the American Psychological Association titled Stress in America - Gen Z notes that 77% of US Gen Z adults were stressed about work vs. 64% of adults overall. That same report notes that Gen Z adults are the most likely to report poor mental health. If there's a silver lining here, they are also most likely to seek professional help for mental health issues.

What's happening to these folks once they get to work that makes them feel somewhat less optimistic about their futures? Some of this may just be the inevitable collision of vision colliding with reality. When I used to complain to my father about work early in my career, his response was often "There's a reason they have different words for work vs. fun."

While we all learn that even the best jobs include aspects we don't love, it is the case that some employers do better than others in creating environments where employees thrive and choose to remain. Gen Z is the biggest cohort in the world population right now - 32% vs. 31.5% Millennials according to Bloomberg. They are starting to show up in force in the workplace. Employers who want to employ their fair share will do well to invest in understanding them.

You can download the report "Meet Gen Z" here to learn more about the research.

Here are a few more highlights from Part 1 of this series: